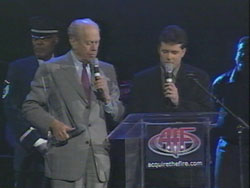 Cross-posted to Daily Kos
Front-paged at Talk to Action

SusanG's diary at Daily Kos singing Gerald Ford's praises as having allegedly kept his faith and his political acts separate finally crossed some threshold that pushed my partner, Mike Doughney and I, into commenting. We wrote for the first time about an event we were present for where Ford threw the full weight of his status as Former President behind one of many key groups in the Biblical American, or what some might term the "dominionist", youth movement; by personally appearing at Teen Mania's "Stand Up" event in Michigan, back in 2000.

This diary, then, are some of the details of that, and unlike almost most every other piece of writing I've seen since Ford's death, this is based on a first hand experience, it reflects an event that happened almost 7 years ago, not during the 1970's.

This has been exceptionally difficult for me to write out, the gravity of what we saw and how to bring information forward; ourselves, holding to some value of civility even as we have seen incredibly uncivil things. But ultimately, I think it's critically important to look at Ford's 'legacy' in light of his actual actions. So at this point, I'm just going try to write 'what I know', while incorporating some quotes from my partner, Mike.

By way of introduction, I'll use a little of what Mike wrote last night:

The organization that created the event, Teen Mania Ministries, is the same one now running the "Battle Cry" campaign, which kicked off its series of stadium gatherings last spring with a provocative display at San Francisco City Hall that they framed as a response to the gay marriages that had been performed there. It seeks to recruit young people as so-called "culture warriors" creating friction and divisiveness around the usual topics over which they obsess, all with the alleged goal of recruiting teenagers to church youth groups.

This is what Ford was doing in his twilight years: a full participant in being put forward as an example of "Godly leadership" at an event like this, eventually being used to further these cultural and political conflicts, and the agendas of dominionist leaders, now and in the future. This "Battle Cry Campaign" of Teen Mania has evolved to have an explicit political component, and it's tied in with all of the usual suspects (Falwell, Robertson, Colson, Haggard, Santorum and Brownback just to name a few). Ford's presence there was used to legitimize Ron Luce and Teen Mania; Ford was part of the process by which the organization has grown and launched its latest campaign.

Unlike so many of the Ford diaries that paint the man as pure evil or pure saint, this is a diary about Ford as entirely human, complete with human failings. Unlike so many that assume Ford left Washington for the greener (or whiter) pastures of Vail, and the desert in California, and had no real recent history thereafter other than being man about town, perhaps mentions here and there of some rounds of golf, raising money for the completion of the national cathedral, and his heart treatments last August, no, this diary focuses upon Ford's actions in the year 2000.  It's a first hand account, a story of how a man who politically claimed to be pro-choice, queer friendly, pro-stem cell research etc ended up becoming the embodiment of validation at an event with thousands of teenagers, for much of what he personally assumedly would have disagreed with; a personified validation for an anti-abortion and anti-Queer youth movement that we will likely be feeling the effects of on into the future.

It's a story of how what may have been one man's personal religious quest can result in a very public 'fatal' misstep that ultimately, for me at least, outweighs any previous stance the man may have taken.

Many writers may focus upon Ford's openness to Queer participation in society, his support for stem cell research, his pro-choice position, others focus upon his role in the rise of Rumsfeld and Chenney, his veto of the FOIA, the mess that was the ending of America's Vietnam war, his dogged attempts to impeach Stevenson, and most importantly Ford's pardon of Nixon - thus ensuring there would never be any consequences, a precedent that has echoed down through the years. No, Ford the man himself, like so many christians, is nothing if not a bundle of contradictions.

But it is his christianity that provides a consistant thread through both his time and office and afterwards. And so it is Hunter S. Thompson's words about Ford, oft repeated over the last few days, that I find a necessary backdrop to begin my own personal story about Ford in the year 2000:

"Ford, who believes strongly in Heaven and Hell, has told more than one of his celebrity golf partners that I know I will go to hell, because I pardoned Richard Nixon."

Ford was a man deeply concerned about the predisposition of his own soul (also see Time magazine's piece on Ford's participation in bible studies), and when push came to shove that to my mind at least became the man's greatest weakness, because in the end, concern about the state of his soul in relation to his god may have been precisely the motivation that led Ford to stand on a stage in the Pontiac Silverdome in Michigan in front of a crowd of tens of thousands of teens and act as validation for so much of what he himself claims to had disagreed with politically in his life.

In April of 2000, my partner, Mike Doughney and I were in Michigan again. We were there, as a part of our ongoing 'work' as what might be termed 'oppositional researchers'.

We had been focusing in on what we've come to term the Biblical America movement (our definition) "the social movement that seeks to use their interpretation of the Bible as the sole basis of all governance and social interaction") was teaching its kids. (The BA movement is actually one of three strands in what we're labeling a 'braided cord'- BA, neo-cons, and anti-individualist/pro-'coporate'ism- i.e. groups over individuals.) By the time we reached Pontiac, we had already spent several years looking at youth events and Teen Mania events in particular.

A year earlier, in 1999, we had also come to the Silverdome for what many have called the largest christian teen gathering in history, Teen Mania Ministry's "Day One", with an estimated 70,000 people.  Day One was a turning point, including its own christian pre-emptive war language years before Iraq war. Day One's pre-emptive war was called for by Teen Mania head, Ron Luce- "We must either fight or become slaves". (See our Acquire the Evidence page about that speech to get the flavour of it). It's a strong rejection of peaceful chrisitianity and peaceful christians themselves, in favour of warlike christianity.)

So, back to the year 2000, we're once again at the Pontiac Silverdome, for a second Teen Mania 'national event,' this time entitled "Stand Up" which will include many speakers over the course of a weekend. Sessions are held Friday evening, Saturday morning, and afternoon, with a finale held Saturday evening. Over the course of those many hours, language and concepts are methodically redefined and there is a great deal of expectation setting. The finale of the Saturday night event will be Ford and Ron Luce. Pat Robertson was another, earlier featured speaker that final night. Robertson's speech is a whole 'nother topic, for another day.

While the previous year's "Day One" had been a mass spectacle of its own sort, the final evening, the emotional climax of Stand Up featuring Gerald Ford, was a spectacle we have not quite seen the like of before or since. When it came time for Ford to come out on stage the audience was at an emotional peak. They had spent many hours listening to speaker after speaker, interspersed with worship sessions, and for many, very little sleep. But this wasn't going to be the entrance of just any speaker; it was going to be a grandiose spectacle. Accompanied by a color guard and regal music, Ford was brought to the stage in an electric cart, and presented with an award created solely for the occasion.

The heart of the Gerald Ford appearance was his leading the thousands of youth groups in what Teen Mania called "The Oath of the Unashamed" (video with full transcript, can be seen here.) It is a pledge that to some may appear relatively 'standard christian', but throughout the course of the weekend, much of the language contained within it had been redefined, such that by the time Ford led the kids in it, some were having a very specific experience, one translated through the experiences and language redefinitions of the last two days.

Yet even taken at face value without the specific Teen Mania-ized redefinition of language, the Oath that Ford read contains explicitly supremacist or 'dominionist' aspects, specifically the lines "I pledge my life recognizing I am no longer my own, belonging to God who has called me to lead the world." and "I make God's word the final authority directing my motives and actions."

"God... has called me to lead the world" and "God's word the final authority".

My partner, Mike has described these two lines far more articulately than I ever could:

Here are two lines that embody much of what Teen Mania teaches, and that have certainly come to the surface through their "Battle Cry" campaign. First is the notion of death to self, and its actual implementation: the radical personality change, central to all of Teen Mania's programs, that they put forward as absolutely necessary if one is to become a "follower of Christ." Second is the notion of their interpretation of "God's word" being the final authority, overriding secular law, and for that matter, all social convention; the basis of the so-called "culture war" that is now central to Teen Mania's latest campaign, with the slogan of their next round of stadium events, starting in March, now being "culture warriors rise up."

Ford provided an imprimatur of legitimacy on Ron Luce and Teen Mania. He used his status as a former American President to both having 'lead by godly example' at the time and add that full weight of that to those two concepts, trying to ensure so called 'godly leadership' on into the future through another generation.

For more, explore our critical web site, Acquire the Evidence: on Ron Luce, Teen Mania Ministries and the "BattleCry" campaign